Supercars are built to go fast. Every aspect of a supercar is designed and conceived to tend towards the ultimate goal of going faster. Every detail, and every bolt. But, what about the timing components? Supercar manufacturers have access to a high number of experts, studies, researches and an almost unlimited supply of money. This can lead to all sorts of creative thinking and this article will try to describe most of them and explain what they do, how they do it and why it’s a good idea.

What is a timing system?

But first, let’s take a minute to understand what a timing system is, what does it eat in the winter and why the design actually matters. To put it simply, the timing system is used to synchronize the rotation of the camshaft and the crankshaft so the intake and exhaust valves open and close in sync with the pistons. In order to do that, most mass-market car manufacturers use a belt or a chain.

The timing of the cam and the crank is absolutely crucial to keep your engine running. Without a proper synchronization, the intake and exhaust valves won’t open at the right time and a proper internal combustion won’t be obtained, ultimately bringing the engine to a halt. In interference engines, a correct timing also ensures that the pistons don’t hit the open valves at top dead center. Such a situation would most certainly bend the valve and eventually ruining the engine head.

The way a timing system is designed and built has a direct impact on how an engine accelerates, reacts, and even sounds. Small changes affect not only the overall feel of the car on the road but also the fuel consumption and the full-throttle acceleration.

Why supercars don’t always have a regular timing belt or chain?

When mass-market vehicle manufacturers need to design a new timing system for their upcoming new engine, they need to think about their target customers and what they want in a car. When Toyota creates a new entry-level model, they know their customers want a cheap, fuel efficient, reliable and discrete car with modest engine performances, mostly used to drive their family around and bring the kids to the soccer game.

When supercar manufacturers need to design a new timing system, they also think about what their customers want but, this time, their customers are looking for a fast, fuel-guzzling powerful machine with little to no consideration for fuel efficiency and low maintenance costs. They don’t need to consider the final cost of a part when they design it or how hard it will be to actually replace any of those components in the future. This allows them to create wildly-designed timing systems including numerous complicated components, with nothing but performance in mind.

And let’s just say that some manufacturers aren’t afraid to go overboard with it.

Even though timing belts are mostly found on mass-market vehicles, some supercars manufacturers, like Ferrari for example, chose belts over chains. The F355, the legendary Testarossa and many other models are all ensuring the cam and the crank work together using a belt. Some people argue that Ferrari chose to use belts in their engines because of their racing experience. Ferrari mainly used belts in their race engines because they are lighter and require less power to move. It sure makes sense and would explain why they apparently never thought that people would drive the car for more than 50 000km and, throughout the years, eventually figure out a way to replace the timing belt without having to drop the whole engine every time.

The Nissan GT-R and older Porsches are also belt-driven. That may or may not be a sign of good design though since Porsche also used to manufacture air-cooled engines. And these weren’t really well-designed engines. But anyway, the main thing here is to understand that belts are usually lighter, quieter and provide a generally softer feel when driving. It’s then easy to understand that some more elegant, or refined supercars chose to use a belt over all the other options available.

On the bad side, timing belts require to be replaced at fixed intervals. A timing belt replacement job is not a big deal for most cars, but for supercars and exotics, it’s really something else. Labor can be counted in days, may involve the whole removal of the engine and delays are to be expected due to hard to find replacement parts and back orders.

Everybody has its own opinion on the subject, but generally speaking, timing belts should only be used on supercars for racing and track purpose. Potential owners should stay away from belt-driven supercars if they are looking for something to drive on a daily basis. Or expect high maintenance costs. And that’s allright too… Hey, if you have the money, why not?

I don’t know if it would be correct to say that the large majority of supercars have a timing chain but definitely those we all have in mind when we hear the word “supercar”. You know, Lamborghini, Audi R8, Bugatti Veyron. Even Ferrari can admit they can be wrong sometimes and come back with chain-driven valve gears as they did on the F136 V8 engine they put in the Ferrari F430. 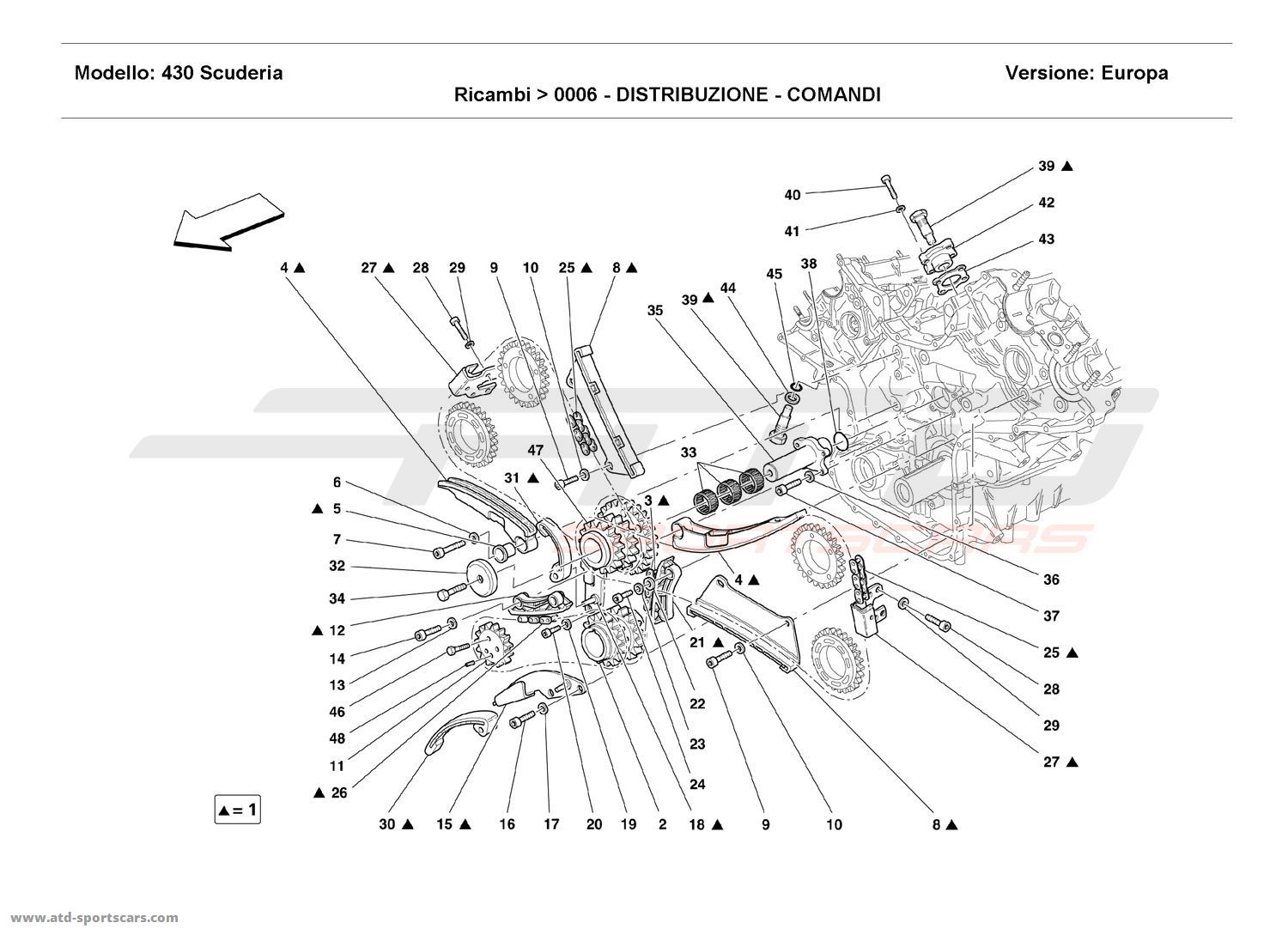 From the costs point-of-view, chains are definitely more efficient. Timing chains don’t need to be replaced as timing belts do. They often need to be inspected though, and guides need to be replaced so that may not be any easier depending on the supercar model. Chains tend to be a little more reliable on the long run and you won’t encounter the same faulty timing belt symptoms as often as you would with belt-driven systems.

From the performance point-of-view, chains are a little heavier on the crank. Metal simply weighs more than rubber and the added weight can sometimes slightly reduce the power output. Timing chains also need to be constantly lubricated and the oil adds some resistance too. The total resistance is somewhat insignificant but, in a race setting, when every tenth of a second count, nothing is to be overlooked.

Metal can also endure more stress than rubber and don’t stretch as much as belts do. Skipped notch problems is something you see a lot on highly modified JDM cars who mostly use belts. Upgrading to a chain-driven system can be a good idea to prevent that.

For the next level in performance and durability, gear-driven timing system is the way to go. Unlike belts and chains, gears don’t stretch at all. Skipping a notch on a cam pulley is pretty much impossible. The biggest drawback to geartrains is definitely the higher noise level and the absence of any kind of vibration dampening. You can literally feel the gears turning in the steering wheel and the whole body of the car. Let’s just say that gear-driven systems are for die-hard racing fans who don’t really care about comfort and smooth driving.

A timing system constituted of nothing but gears has the advantage of requiring almost no maintenance at all. Yes, inspections are still recommended at fixed intervals and the oil seal behind some of the pulleys may still leak at some point but unless a gear breaks, the owner will probably never have to have the front cover removed to do any kind of timing work ever. 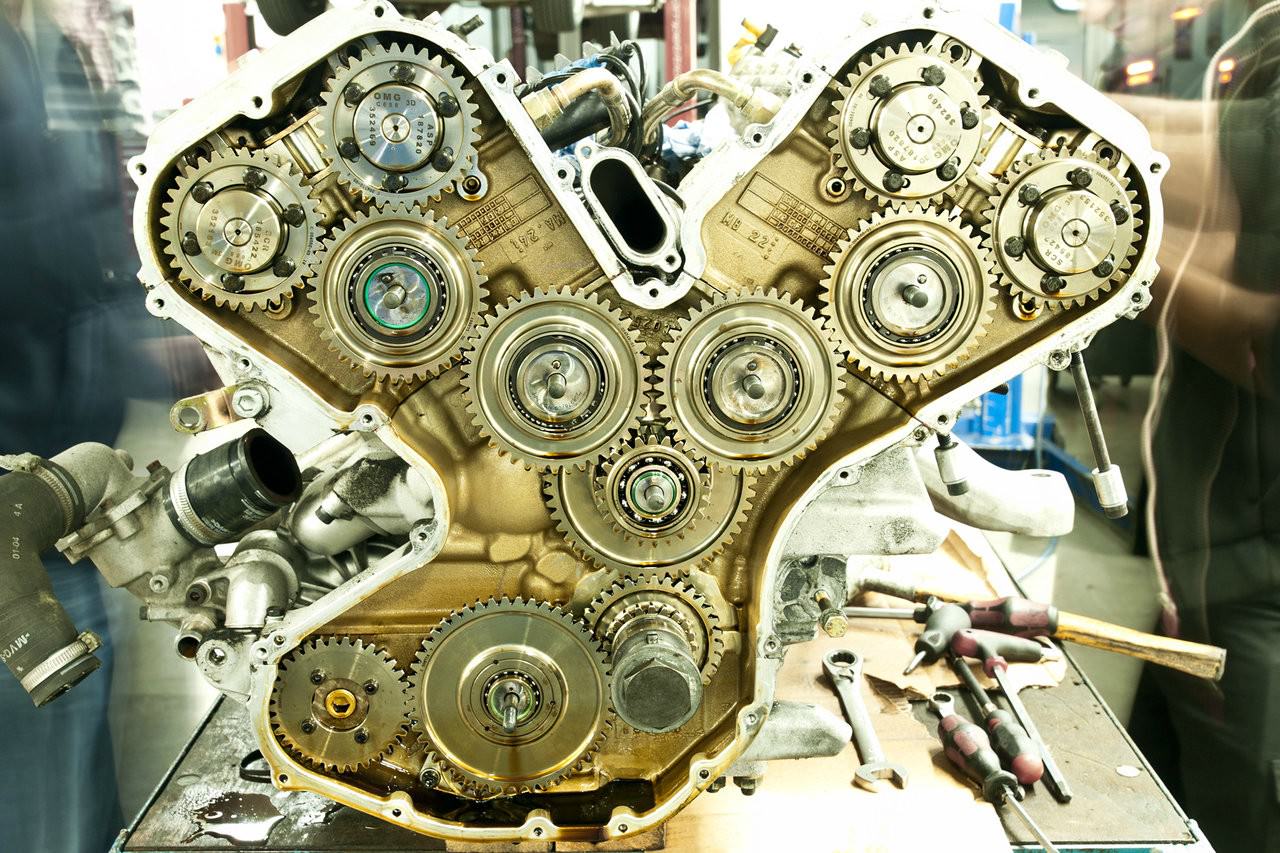 The Ferrari Enzo is the best-known example of a supercar using a geartrain to keep all the valves in-sync with the pistons. All those gears of different sizes and shapes kind of look like those high-end luxury watches. And they probably require the same skill set to work onto.

The latest innovation in the valvetrains department is the camless engine, first manufactured and sold by Koenigsegg. Camless engines don’t need any kind of belt or chain to keep the cam rolling and ensure the valves open at the right time relying on electromagnetic or pneumatic actuators controlled by the ECM instead. Such engines are able to output 50% more torque and power while greatly reducing emissions.

Forget about the oil resistance and gear noise. And, thanks to the actuators, the ECM has total control over all of the cylinder’s internal combustion independently. When used with a wideband O2 sensor on each cylinder, a setup like that allows the various parameters to be adjusted in real-time, based on highly detailed data on how each cylinder is performing. You can’t really beat that in any way.

But the cost of such a system is tremendous and, even without the maintenance cost associated with belt-driven systems, it still the most expensive of them all. Qoros, a Chinese company is actually trying to implement a camless system on a mass-market vehicle but the challenge is great. But, I digress.

Supercar manufacturers, on the other hand, can afford these costs and many of them have already expressed their interest in this technology, still only in its early stage of development.

All timing systems are good systems. And most of them have their pros and cons. Supercar manufacturers use all of them in different car models, depending on the target user and the performances expected. Maintenance costs are out of this world with every supercar anyway. But to sum it up, belts are good at higher rpm, chains are a good compromise, geartrains are the hardcore stuff and camless engines are literally the world of tomorrow.

Supercars require an acute attention to detail when it comes to its engine parts like geartrains and timing belts. Marine engines are similar, especially with the saltwater component added in which can cause corrosion quickly. The ongoing maintenance of these engines should be factored into the cost to buy a yacht. Timing systems have come along way since Ole Evinrude put out his first marine engine.

One can only expect what the future will bring but
be sure that timing systems will continue to be upgraded and perfected as long as internal combustion engines are powering the supercars we love so much.

Six Cars Falling To Be a Supercar

Sports Superstars and Their Supercars

Supercars and Timing Components: What sets them apart

10 Most Impressive Supercars at the 2018 Geneva Car Show

ABOUT US
Hi, I'm Ted, a Supercar enthusiast for the last seven years. I also enjoy car racing. I have been loving cars since the day I knew about it.
FOLLOW US
© Copyright 2017 Caparo - T1 – All Rights Reserved
We use cookies to ensure that we give you the best experience on our website. If you continue to use this site we will assume that you are happy with it.Ok